Last Thursday, NotTheWorstNews was honored after a story about dogs getting married was selected for WordPress’ freshly pressed page. For those who are unaware, WordPress selects about 11 posts each weekday to be “Freshly Pressed” and posts them on the front page of WordPress.com. For us, it was a dream come true, worthy of a celebration far greater than the $158,187.25 dog wedding we wrote about!

“I’ve been freshly pressed, and it’s not all it’s cut out to be!” a grumpy pair of jeans told us at the ‘Freshly Pressed Celebration’ we held in an elevator of a skyscraper, while freshly pressing all of the buttons, and then running out of the elevator, while the rest of the suckers stuck at “our party” had a lengthy trip to the Penthouse. 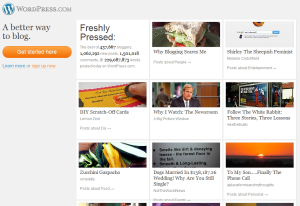 The best thing to come out of this dog marriage, according to the dog groom, who says his wife is a “total bitch!” Yeah, we just made a female dog joke, but we’ve already been Freshly Pressed, so there’s really nowhere to go but down from here.

Anyway, as we mentioned, a pair of jeans had its own opinions of the merits of being freshly pressed, essentially saying being ironed sucks, especially when it’s by someone who has no clue what they are doing, and over-fills the iron reservoir with water, which spills on to the jeans, making a mess of everything. “I’ll tell you what’s worse than being ‘freshly pressed,'” said the jeans, “the following three things that me and my denim friends talk about in the closet…”

1. “Being a pair of freshly pressed jeans in a school yard, being worn by a kid with a freshly-pressed Twilight ‘Team Jacob’ T-shirt! Total magnet for bullies. And nobody considers the jeans’ feelings in these bullying incidents. When is someone gonna post an anti-jeans bullying video on You Tube? Still this whole situation is better than being an unpressed pair of jeans on a kid wearing a “Team Dr. Carlisle Cullen” scrub top! That never goes well in the school yard!”

2. “Being a pair of Almost Famous Jody Girls Distressed Acid Wash Super Skinny Jeans! Yes, this is a real product name at Zumiez, and as a pair of jeans, I can tell you the name adequately describes the misery involved. First off, you’re distressed. Why are you distressed? Because you were just washed in acid! You entered some reality show that dared jeans to dive into acid, and you didn’t win, which is why you’re only almost famous! Then, because you’re ‘super skinny’ and being sold at Zumiez, some skateboarder is going to try to squeeze into you, and do all kind of high risk maneuvers on street railings, making you wish you were back in a vat of acid.”

This is what maids in Caribbean hotels will do when left alone in your room for hours! (It’s a giraffe made out of a bed spread and towels freshly pressing a shirt!)

3. “Being a pair of Lifetime No Plans Sweatpants. Yes, another real product, this time from Pacific Sunwear. You know, as a pant product, the one person I want to actually make plans at some point in their lifetime, preferably sooner, rather than eight hours later on the couch, is the person in the sweat pants! At least so I think until the action-sports-oriented PacSun customer begins rock-climbing in a 150 degree California desert! Then you just dream of the days of being a pair of sweatpants on some overweight person at the airport!”

We thank everyone who read, liked, of followed us since we’ve been freshly pressed! In honor of y’all, we’ll be writing entries inspired by you all this week, starting tomorrow!

Like Loading...
‹ Spiders + Blowtorch + California Brush = Wrong Solution To Kill Spiders!
University Professor Suggests The Movie “101 Dalmations” Could Lead To Teen Smoking. What Is He Smoking? ›