Home › Technology › Snapchat Videos Disappear Forever As Soon As World Ends. We Have 10 FAQs For Snapchat.

Snapchat Videos Disappear Forever As Soon As World Ends. We Have 10 FAQs For Snapchat.

Tom’s Guide reports that a Federal Trade Commission settlement has lead to Snapchat agreeing that it is not allowed to say that it’s videos disappear forever.

For those of you who don’t know, Snapchat is a smartphone App where people may have believed they could send brief videos for their friends to look at, which would self-destruct just like in a James Bond movie, minus any explosions.

Apparently it is “not hard” to make the videos reappear or transfer the videos, which would lead to college students everywhere worrying about those nude images they drunkenly sent to their snap friends if any of them actually read FTC decisions.

“The official FTC complaint pointed out that, from October 2012 to October 2013, the ‘FAQ’ page on Snapchat’s website read: ‘Is there any way to view an image after the time has expired? No, snaps disappear after the timer runs out.'” 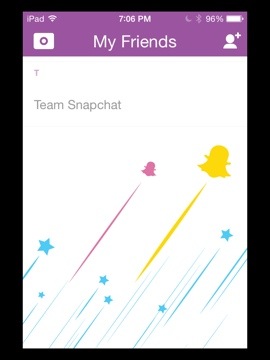 These ghosts may not actually disappear into the stars unless the stars die, making your Snapchat app less useful.

Also from the article: “‘While we were focused on building [Snapchat], some things didn’t get the attention they could have. One of those was being more precise with how we communicated with the Snapchat community,’ Snapchat posted on its blog today.”

1. “Does this mean your Frequently Asked Question saying “Snaps disappear” will disappear? We bet you wish you made that FAQ disappear before the FTC saw it, huh?”

3. “Don’t you think a better name for your application would have been ‘Snap-And-Shut-Your-Mouth-Instead-Of-Asking-Questions?'”

4. “When I completely screw up a question on a test in school can I have permission to yell, ‘Ohhhhh, Snapchat!’ Also, can I trademark that phrase before I start hearing it on sitcoms?”

5. “Anthony Weiner, here. So you mean all those videos I sent after an intern convinced me to switch to Snapchat are available forever? Ohhhhh, Snapchat!”

7. “Speaking of downers, why is the Snapchat logo a ghost? Given that ghosts disappear, wouldn’t a zombie that comes back from the dead be more accurate?”

8. “Have you consulted CNN? Maybe they can find a panel of experts to debate ways that the videos could disappear into the wrong ocean forever? And by forever, we mean CNN will debate this forever, and not the videos will disappear forever, because you have already established that they won’t.”

9. “So just clarifying, for a moment. There is no real purpose for this app now, is there? Does this mean you regret rejecting Facebook’s $3 Billion buyout offer? Do you think you can inadvertently make that offer reappear?”

10. “The government intervened to protect people’s privacy when they do potentially regrettable things online? Based on that result, Snapchat, why aren’t you in charge of the entire internet and American telecom system?”