Home › Humor › From AC/DC To Zeppelin, Paul Ryan Knew How To Reference Non-U.S. Bands In His Speech!

From AC/DC To Zeppelin, Paul Ryan Knew How To Reference Non-U.S. Bands In His Speech!

Yesterday, we pondered what song Paul Ryan would use to enter WWE-wrestler style for his speech at the GOP Convention, after one of his favorite bands, Rage Against The Machine referred to him as “the embodiment of the Machine our music rages against.”

We incorrectly guessed songs by Mitt Romney supporter Kid Rock, as Paul Ryan entered to Irish-founded Band Thin Lizzy’s The Boys Are Back In Town. In fairness, half of the band’s current members were born in the USA, according to Wikipedia.

During his speech, Ryan bragged his iPod is filled with music from Australian rockers AC/DC to British rockers Led Zeppelin.

Is this a sign that Ryan is working his ability to demonstrate himself as someone who can grab the hearts of people around the world like Barack Obama? Or perhaps he didn’t want to risk using another American band reference that may have resulted in more insults in Rolling Stone Op-Ed pieces.

1. Canadians – Avril Lavigne and Nickelback lead singer Chad Kroeger. They’re getting married, which means they may make all kinds of music together, which may be more than audiences in the 2010’s demand of either of these artists.

2. Swedish Alt-Rockers, the Sounds. In their song “Living In America,” they sing “We’re not living in America, but we’re not sorry.” So that would probably make a bad song choice for any campaign by either party. 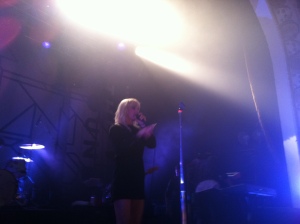 The Sounds’ “Living In America” would probably not please crowds at a U.S. Political convention.

3. Iceland’s Bjork. Given Iceland kind of went bankrupt, and Bjork is probably that country’s top export (now that the country learned to stop exporting ice, which just melts en route to the rest of the world, resulting in losses), she may also not be ideal for the Republican fiscally-responsible ticket.

Like Loading...
‹ Don’t Stop Believin’ Mitt Romney Will Get A Better Entrance Theme Song Than Paul Ryan At The GOP Convention
If Clint Eastwood Wanted To Debate An Empty Chair, There Were Plenty In Theaters When His Movie “J. Edgar” Opened! ›