CBC reports that in Miramichi, New Brunswick, an angry beaver spent part of Tuesday delaying traffic and chasing people around the streets.

The local police had the following to say:

“The guys left it alone, told the citizens to leave it alone and it went on its way to where it was going.”

3 Places We Speculate That The Beaver May Have Been Going.

1. The United Kingdom. As we wrote yesterday, a woman in England received a Canadian passport in the mail, instead of the teddy bear that was sent to her, due to a Canada Post error. So with those kind of passport mix-ups in Canada, it is in theory possible that a beaver may have its own passport, which it would presumably use to meet the Queen, who is on the front of Canadian nickels.

2. The Canadian Mint. “I don’t need to pay $120 for a stupid passport to prove my identity,” a beaver might say, “My face is on every nickel in Canada. So I will buy that nickel with five pennies, but since Canada does not use pennies any more, I’m going to have to storm around this small town demanding old pocket change.” 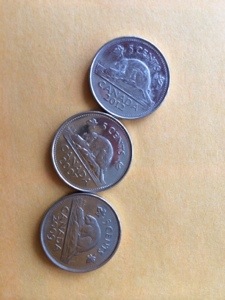 The only I.D. any beaver rampaging through Canada needs?

3. Nickelback Headquarters, Alberta, Canada. The beaver just listened to Nickelback, and was furious that the band was clearly suggesting an endorsement of the band by beavers, who like most rock n’ roll lovers, have better taste in music.