Home › Crime › Alleged Bicycle Thief Claims On Video: “It’s Not Illegal To Buy Stolen Stuff… I Looked It Up Dude!”

Alleged Bicycle Thief Claims On Video: “It’s Not Illegal To Buy Stolen Stuff… I Looked It Up Dude!”

A Portland, Oregon resident saw his stolen bicycle offered for sale in a Craig’s List ad offering to sell the bike in Seattle, Washington. And he chose to fight internet technology with more technology, including Reddit and an apparent smart phone camera to attempt to approach the alleged thief and conduct a citizen’s arrest.

You can view the video on Gawker. Most notably, when confronting the alleged thief, at around minute 4:44, the alleged thief declares: “It’s not illegal to buy stolen stuff… I looked it up.”

We wonder if he “looked it up” before claiming to buy it on Craig’s List, knowing it was stolen.

Here’s a tip: look up if knowingly buying stolen merchandise is legal. Then look up if announcing you knew the merchandise was stolen while you are being recorded is a good idea.

1. “It’s not illegal to buy stolen bikes, and then not give you back your bike, and then run away on video, I looked it up!” The bad news, is there is no law that probably explicitly says that word for word. The good news is ignorance of the laws that more eloquently explain why the point is wrong is no excuse. 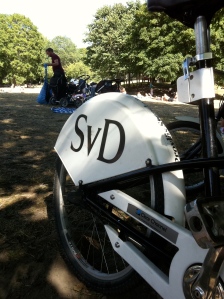 The fact you believe “SVD” stands for “Stolen Vehicle Department” does not make it legal for you to buy stolen merchandise, regardless of what you looked up!

3. “Sorry, Officer, but it’s not illegal to steal your wife, I looked it up! While I was having consensual sex with your wife and you were at the police station, not looking things up.” Saying this will probably lead to consequences that result in nobody being happy. Don’t believe us? Look it up in Wikipedia or Reddit!

Like Loading...
‹ Drunk Man In Superman Suit Should Have Clarified The “S” Stood For “Stupor!”
Mayor of Toronto Admits He Was “Probably” Reading While Driving On Expressway ›