According to the Detroit Free Press, a 9-year-old boy has worked to help solve Detroit’s financial crisis by selling lemonade and popcorn. He began his mission on Monday of last week, and by the end of last Friday, he had raised over $3,000 in profits for the City of Detroit.

Obviously, this is an appropriate moment to check in and see how the entrepreneur, we previously wrote about on this site, is doing raising money to research the feasability of a Detroit zombie-theme park!

And with a few days left, it seems that, at the time of us writing this, the 9-year-old lemonade stand has the more lucrative business plan compared to the zombie apocalypse theme park… that had a head start of many weeks over the lemonade-stand-kid! The Detroit zombie-theme park has raised less than ten-thousand dollars and it has a $145,000 goal!

1. Kid Rock. As we look on iTunes, we can’t find Kid Rock’s hits from his old hit album “Devil Without A Cause,” presumably because he has boycotted iTunes for much of his career. But we can find some songs scattered throughout his career that we never heard of. Anyhoo, as he apparently prefers giving his music away for free on pirated-music sites, there’s no excuse for your zombie-themed park under-performing him in Detroit. 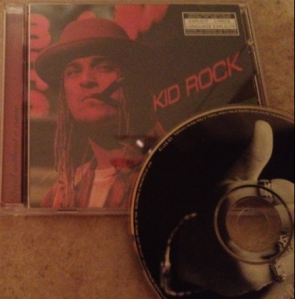 This is the only way to legally enjoy much of Kid Rock’s music, unless you have a MacBook Air, which doesn’t have a drive to put this ancient disc in.

2. A 9-Year-Old with a Powerade stand! That kid’s not even trying on any level!

3. A Zombie with a Lemonade stand! Zombies are the worst sales people ever. And they’ll just keep biting potential customers, turning them into zombie-competitors, selling zombie-made lemonade, when all the zombie-world market really wants is brains, not lemonade.

Like Loading...
‹ India Has More Olympic Medals In Its History Than Michael Phelps, And Is Guaranteed At Least One More In Boxing!
Drunkard Climbs In Stockholm Cop Car, Demands To Be Taken To Drunk Tank ›